by Hauschka on FatCat Records 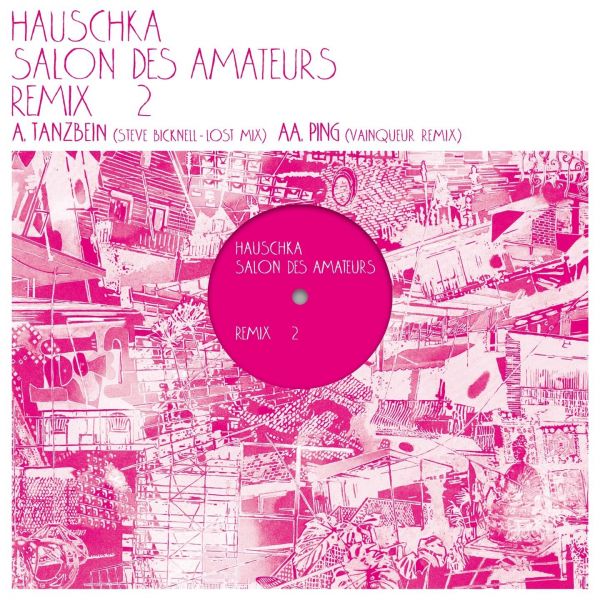 This is the second of two stunning remix 12”s, pitched at the dancefloor and kicking off a wider project of reinterpretations of Hauschka’s last full-length, Salon des Amateurs. Following May 2012's initial release (featuring mixes by Ricardo Villalobos & Max Loderbaur and Michael Mayer), EP2 sees another two hugely influential artists tackling the source material and combining to form a staggering 12” of immersive, visceral techno.

In April 2011, Hauschka’s ‘Salon des Amateurs’ album saw the critically-acclaimed pianist / composer utilising the percussive qualities of ‘prepared’ piano (where everyday objects like gaffa tape, tinfoil, bottle tops, ping-pong balls, even vibrators are placed across the piano's internal strings / hammers to produce an intriguing spectrum of expansive timbres) for a unique take on techno and house music. Expanded to include drum kit and orchestral instrumentation, the album - named after the club in his native Düsseldorf - comprised a rousing set of dance tracks. Simultaneously organic and mechanised, imbued with a palpable sense of fun and sonic depth, the record featured múm drummer Samuli Kosminen, Calexico’s John Convertino and Joe Burns, and Grammy award-winning violinist Hilary Hahn.

This second vinyl-only EP runs in advance of a full album of electronically-angled ‘Salon Des Amateurs’ remixes, which have been commissioned from a selection of producers - including the likes of Matthew Herbert, Vladislav Delay, Alva Noto, Ricardo Villalobos & Max Loderbauer, Patten, and Michael Mayer. Both Steve Bicknell and Vainqueur are very old friends of FatCat and little short of legendary names in the techno genre. London-based Bicknell is co-curator of the seminal, scene-defining Lost nights, which date back to the early ‘90s, where luminaries such as Jeff Mills, Basic Channel, Richie Hawtin, Suburban Knight, and Robert Hood gained their first ever UK bookings (and where FatCat founder Alex Knight frequently appeared as DJ). A close ally of Derrick May, Kevin Saunderson, Juan Atkins and Laurent Garnier, Bicknell also runs a number of labels, including Lost Recordings and Cosmic. His brilliant reinterpretation of ‘Tanzbein’ is a dark, pounding, floor-friendly track that drives on a rotor-flicker and a deep kick-pulse and coats everything in a pumping, viscous, bass-ooze.

Berlin-based René Löwe, under his moniker/alias Vainqueur, was a key player in the Hardwax shop/scene of the early ‘90s (back in the days when FatCat itself was a pioneering electronic record store, with the two shops closely linked, regularly trading records and ideas) and cemented his place in the pantheon of classic techno with several releases on the Chain Reaction imprint, as well as being one of the very few artists to appear on Basic Channel. René’s fizzing, shimmering, amorphous dub take on ‘Ping’ is classic Vainqueur – chasing clouds of radiance through the deployment of rippling delay and continual filtering. There are a host of Basic Channel / Chain Reaction imitators out there, but the sheer quality stamped across this heavyweight 12” punches holes in the opposition and marks it out as the real deal.