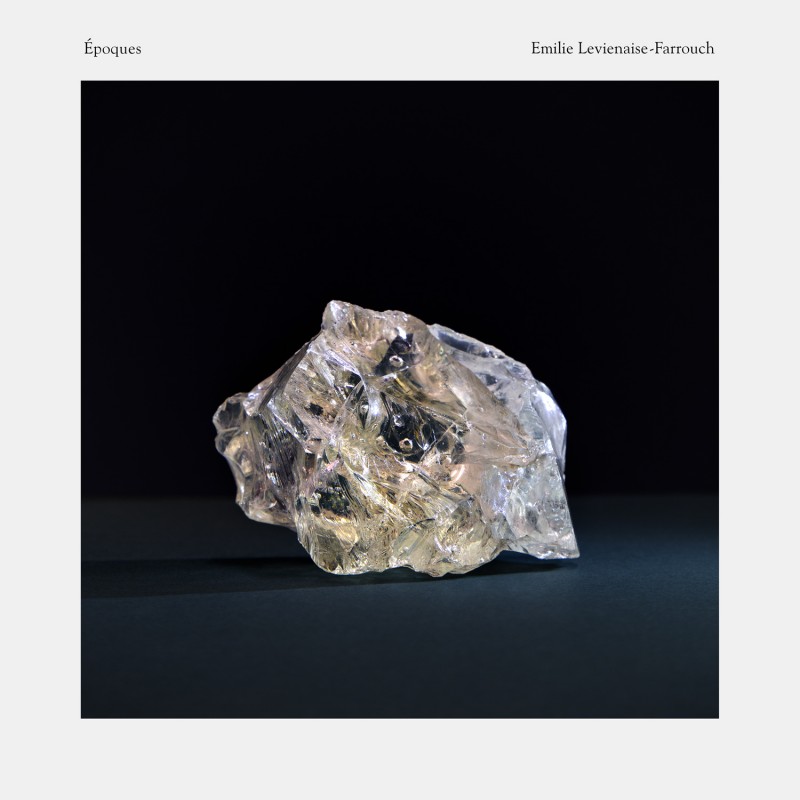 French pianist / composer Emilie Levienaise-Farrouch returns with the stunning 'Époques', her sophomore album for FatCat's pioneering 130701 imprint. Witnessing an increased assurance and dynamism in both Emilie's playing and composing, 'Époques' marks a big step forward for the London-based artist. A bold and adventurous album that alternates between passages of emotive, sinuous solo piano; stirring compositions for viola and cello and some beautifully sprawling electronics, it has been masterfully pieced together to further reveal a unique and intelligent sense of artistry, and a composer who really does deserve your full attention.

Losing some of the chill of Emilie's previous album, 'Époques' sound is both warmer and more honestly, emotively grounded. With a more coherent narrative drive, it retains the former's gentility and intricacy, whilst at times unravelling or teetering towards a palpably edgy, aggressive point of collapse. Over the course of its 44 minutes, the record modulates in intensity and moves between passages of sublime beauty to menace and despair. The tone for the album is outlined within the first two tracks. Opening with the sparse piano of 'Martello', which flowers into life and draws itself around you with sinuous vines and rising clusters of piano, it then falls into 'The Only Water', a rich yet murky, subterranean dreamscape of electronics and strings that hover and saw like Richard Skelton before evolving into some dark chamber duet, whilst slowly everything peels away into layers of delay. 'Redux' is another solo piano track, a meandering drift that winds its own sweet way before falling off into the glowering electronics and spaced cello figures of 'Overflow' and the dark, consumed-by delay piano of 'Fracture Points'. The brooding 'Ultramarine' opens a sound-field that lies closer to film score – edging perhaps towards the sensibility of former labelmate Jóhann's Jóhannsson's brilliantly unsettling 'Sicario' soundtrack.

The writing process for 'Époques' began back in early spring 2017, when Emilie was invited by The Britten-Pears foundation to spend two weeks alone at a composer's retreat in Aldeburgh, Suffolk. Staying at the modernist bungalow formerly home to Imogen Holst (Benjamin Britten's assistant and Gustave Holst's daughter), these two weeks of exile from London (her home for a decade) entailed an almost complete absence of human interaction; long walks in the Suffolk coastal landscape; and long hours playing through the night on Holst's little upright piano. It was an awakening opportunity to refresh the type of sounds she had been hearing for an extensive length of time. Away from the noise and rhythms of the city, paying attention to a landscape of reeds, marshes and waves, to slower, more tidal patterns, the experience fostered a more naturalistic approach, which can be felt in the record. The sound of the Church Walk piano itself is audible in abstracted form across the album, in tracks such as 'Fracture Points' and 'Morphee', as Emilie recorded every individual note of the little upright, at various velocities, and then turned those recordings into a virtual instrument using Logic Pro's ESX24 sample mapping facility, enabling her to virtually “play” the Holst piano at any time, using a midi keyboard and laptop. Most of the solo piano pieces were initially developed in this way, before later being replayed and recorded live on a real piano at Goldsmiths Studio. The prevailing tone of the album emerged during these two weeks of isolation and grew over the following nine months.

Eventually mastered by Martyn Heyne, the album was recorded in London, in the winter 2017-18, with sessions taking place both in Emilie's home studio as well as at the Goldsmiths Music Studio with engineer Sean Woodlock, who also worked on her debut. Many elements were recorded at home, with Emilie also sampling certain other acoustic instruments - from clarinet to bass guitar - creating a set of basic sounds that she could then manipulate electronically. The vast majority of these sounds were born from acoustic sources, the sole exception being a MicroKorg synth. For the studio sessions, Emilie brought in violist Rob Ames and cellist Brian O'Kane, both soloists in the London Contemporary Orchestra, who each brought a particular sound and precise, incredible musicality to their parts.

Compared to Emilie's 2015 debut, 'Like Water Through The Sand', the feel of the new album appears generally darker and grittier, though in an organic way. It's more grounded and less cold, with the piano recorded using warmer microphones and preamps. The string writing uses more extended playing techniques, such as bow overpressure on viola and cello, and multiphonics on bass guitar. Emilie also explains that "although the piano has always been a way of expressing how I feel and I wanted to create pieces that featured melodies, I wanted to use the fact the piano is a percussive instrument that can handle strength, rhythm and force just as well as gentle, intimate playing." This powerful, emotive physicality is clearly audible on tracks like 'Redux', 'Fracture Points' and 'Époques'. There are other pulsating/ rhythmical elements running through the record - from chopped up field recordings of waves ('The Only Water') to looped bowed bass guitar in 'Ultramarine', and the effects applied to the piano throughout 'Morphee'.

Thematically, the album's title refers to "the constant, deeper changes that we go through as human beings, on a societal, natural and personal level, which even though they can be devastatingly painful, we need to accept and embrace." The term 'Anthropocene' (denoting the current geological age – a period in which human activity has been the dominant influence on climate and environment) was discussed a lot when Emilie began thinking about making this album: "even though this is in not the subject of the record, it pushed me to think about our relationship with nature. The ambivalence and tension between nature's threat and beauty, strength and fragility, are all things I wanted to reflect, hence the contrast between solo piano or string duet and much thicker, electronic-heavy tracks, between organic and technological elements. I was listening to works that deeply mix electronics and purely classical influences, such as Michael Gordon's 'Industry' for cello and electronics or extended techniques, like overpressure, that make an acoustic instrument sound like it has been affected by an electronic element. To me this reflects the constant tension between a traditional and modern human approach to nature." What Emilie aspired to make was "a music that is not always comfortable to listen to, that has some sounds that feel foreboding, like they could belong in a horror film soundtrack, compared to most of the 'modern-classical' music that has emerged over the past few years."

Certainly, there is a very powerful visceral and emotional edge to the album, some quest to reach deeper beyond the expected. 'Époques' is a deep, forceful, at times difficult, listen - a true shifting through the various registers of emotion, from dark to light. Whilst fans of artists like Max Richter, Dustin O'Halloran and Jóhann's Jóhannsson ought to surely find much to love in this album, and parallels may be found to a progressive new breed of female peers like Claire M Singer, Lucy Railton and labelmate Resina, it is a record that genuinely sees its maker finding her own space, fully formed and conclusively set aside from peers and influences. No mere background listen, 'Époques' is a proper journey of an album – a record to immerse yourself into; that stands up to and rewards repeat listening, revealing itself more and more over time.